Okay, lovely people, this is huge for me. I’m actually in the midst of writing a book. It’s called “Front-End Tooling with Gulp, Bower and Yeoman”, and it’s – you guessed it – about front-end tooling with Gulp, Bower and Yeoman. Actually I’ve been writing on it for the last 9 months, and now it has reached the phase of going public for the first time. It’s in the so called “Early Access Program” from Manning (MEAP), where you can buy it before it goes to print, helping me pointing at all the mistakes I make. Or do some slap on the back because it’s so good.

It’s a huge step for me, but a small MEAP for mankind.

There’s a voucher code for 50% off below

I tend to call my book “FETT”, because it’s the name of the blog. It that case, it stands for “Front-End Tooling Talk”. I’ve written and talked a lot about different tools for Front-End developers in the last few years, so some guys thought it might be a good idea to turn those thoughts into a book. So here are the learnings that I made at my time at Netural and my current employment at Ruxit.

But why those three tools?

So, here’s the thing: I won’t do that stereotypical things with you every Gulp course tries to do. The ever-repetitive “If you want to build this, use that plugin. And if you want to use that, use this plugin” mantra you see over and over again. So many people have shown you how there Gulpfile looks like and that’s absolutely fine. Because you can learn a lot from them.

But you wouldn’t need a book telling you the same. This is where the Gulp part from “FETT” differs: You will learn how Gulp and streams work underneath.

You will learn that Gulp is basically a collection of other tools combined under one graspable API. That it uses streams and virtual file systems. And you will learn not only how super awesome this is to use, but also where the catch is when you want to combine it with other things.

I will spend a good deal of time showing you the wonderful art of pipeline crafting. You can do so much with stream arrays, incremental builds, pipe snippets, merged streams, etc. that really helps your special use cases. You will also learn when to extend Gulp and when to just let it be.

As for which plugin will compile Sass for you or PostCSS or React or whatever, you will figure that out on your own. Here you will learn why a gulp-ruby-sass behaves a tad different from gulp-sass, and how you can combine it with un-Sass-y things. 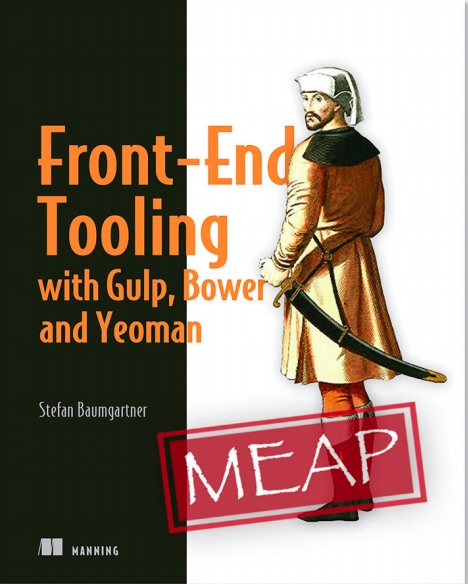 So that’s pretty advanced stuff for Gulp, but it always burns down to a common denominator all build tools have: Getting your stuff processed to have some great result in the end. Heck, we even used Grunt at some point, but then decided that Gulp would be a more fitting technology because of its flexibility. And to be honest: It’s a lot more fun.

The same thing is going on with Bower. It’s pretty boring to learn how to install stuff. It’s more fun knowing what dependency trees are and what you have to keep an eye on when creating new components. Those learnings are directly transferrable to every other package manager out there. Want to use NPM instead of Bower? Same chapters work for you, because your knowledge will be universal (JavaScript, buzzword-bombing).

The last one. This tool is actually the thing that got me here in the first place, as it brings the whole workflow of building pipelines, dependency managers and project templates to a full circle. Yeoman helped our Front-End team keeping project standards fresh and exciting for all our 10 developers. And again, since installing and using generators is pretty boring to teach, you will learn how to create your own generator.

A modern workflow for the modern developer #

So hey, join me and a lot of other developers on a wonderful journey. If you access your MEAP now, you get 50% off with this code: mlfetool. You can read the first chapter by clicking here.