I missed a little anniversary. Roughly 10 years ago (on April 8, 2012), I started blogging on fettblog.eu! Time flies! I think this is my longest-running project, let’s take some time to reflect.

This blog was named after a format we had at the company I was working, the “Front-End Technology Talk”, or “F.E.T.T.”, which served as a platform to exchange new technologies. This was the heyday of HTML5, where you were keen to learn every new CSS technology and Web API. We chatted on HTML5 media, CSS transitions, and animations, pseudo-elements. Fun! It was really nice to see all those technologies emerging. 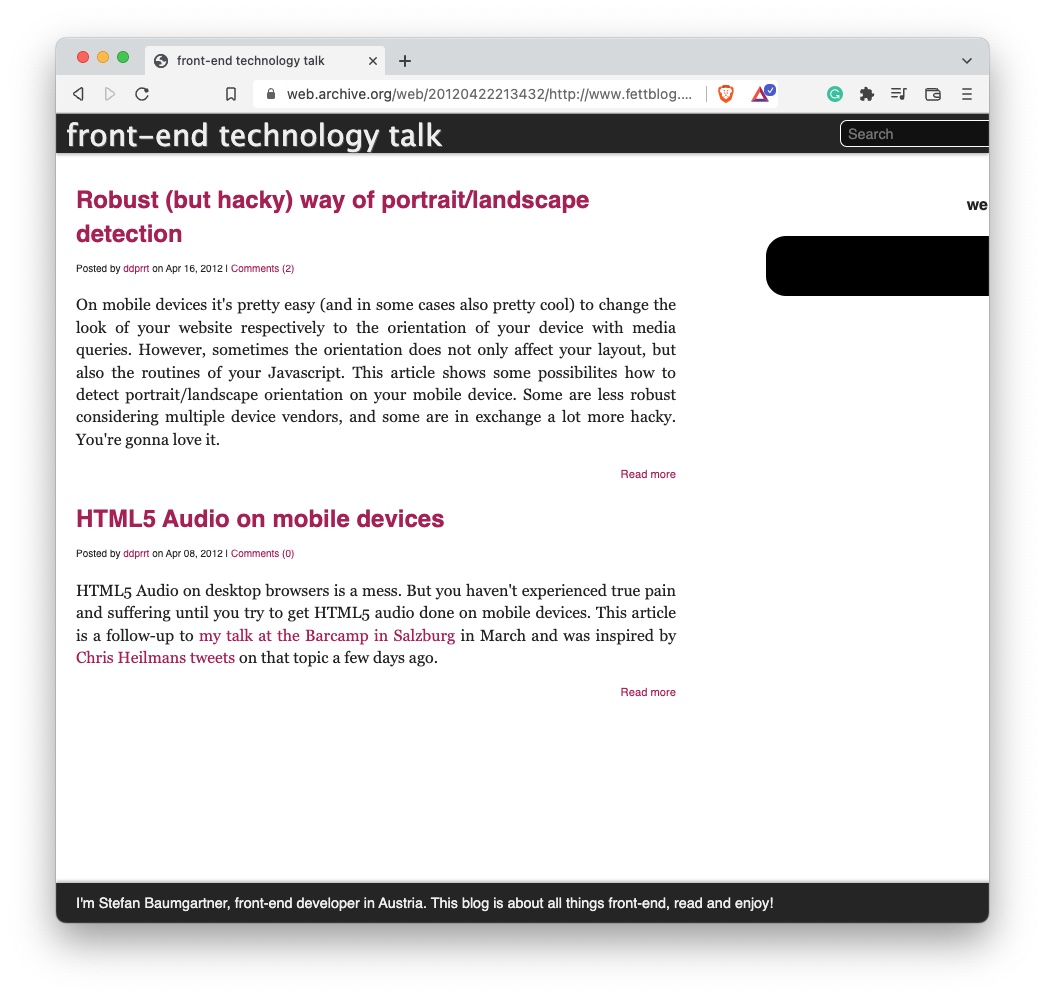 Some technologies were brand new and somewhat unchartered technology. Lots of things were undocumented or behaved differently in different browsers, especially mobile browsers. I used this blog to write down things I figured out on this journey. The first article was HTML5 Audio on Mobile devices and everything that came along with it. The first few articles were all about workarounds, feature detection, etc.

The website started out on some cheap host in Linz for 5 Bucks a month including Domain. Tremendously underprovisioned, running a CMS called ModX. Everything was slow, clumsy, and not how I wanted it. So I switched to WordPress early on. I did a really nice re-design a year after launch, mostly because some of my articles and talks gained traction. 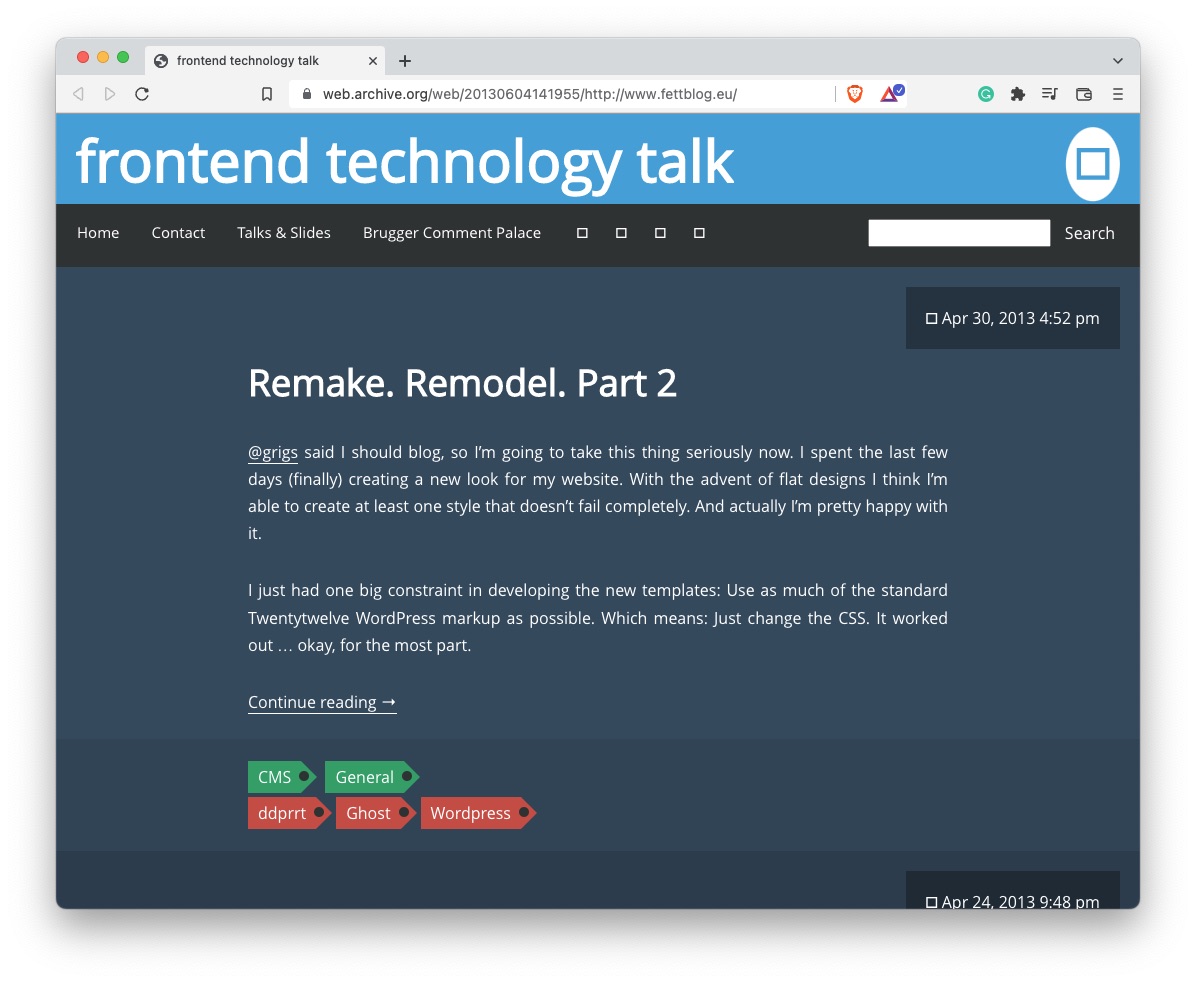 I didn’t stay with WordPress that long. I like WordPress for what it is, but I needed something that was more in tune with how I work in general. Writing Markdown files and committing them to a GitHub repo looked really promising. So I switched to Jekyll. 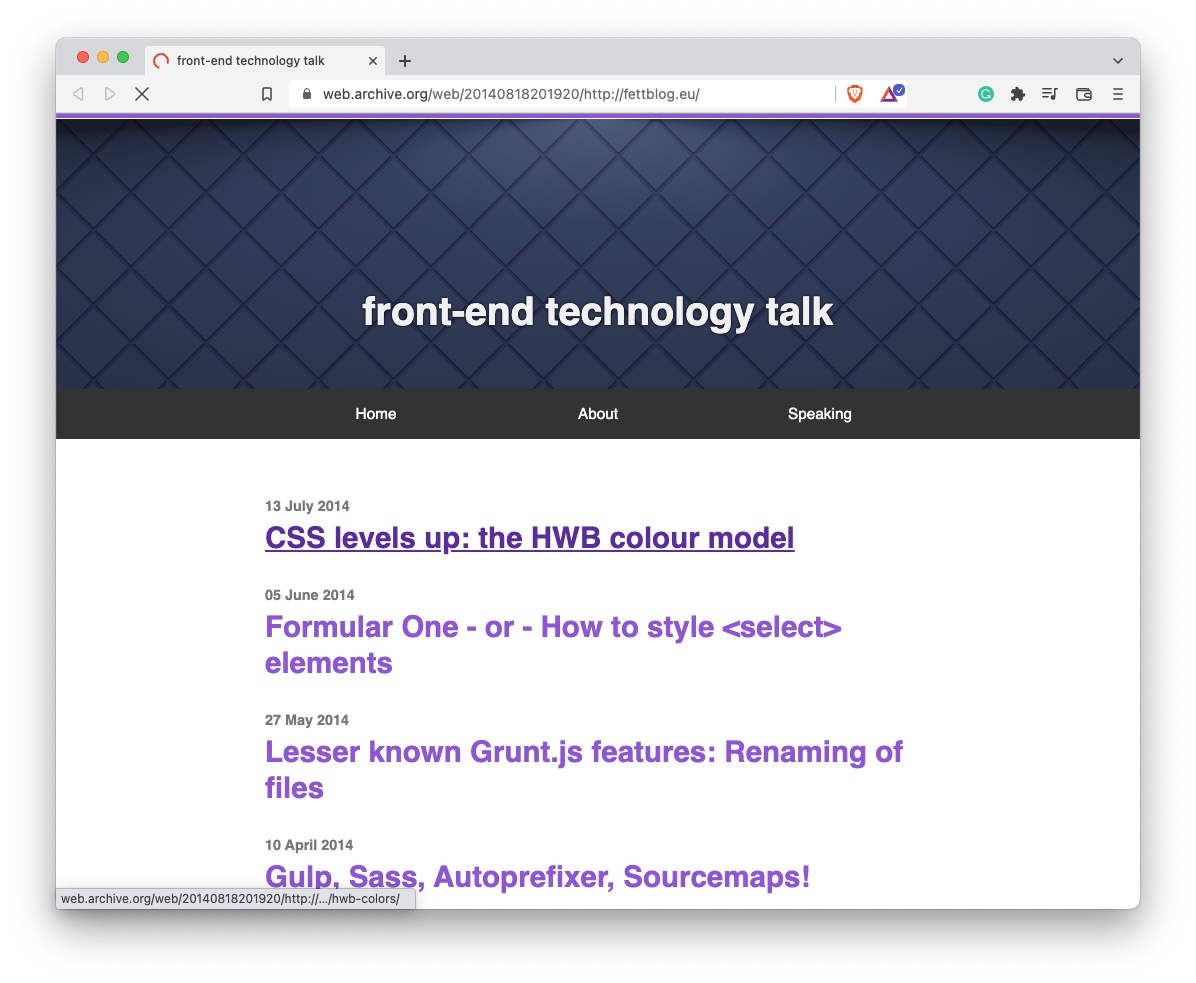 What was really nice is that I could migrate all WordPress posts over to Jekyll really easily. Using Markdown as a format helped me continue working on my website over the last couple of years. Even when switching static site generators.

I stayed with Jekyll really, really long. I enjoyed working like that, and it started getting me into the tech setup that is now commonly referred to as Jamstack.

Once I worked on the – really popular – TypeScript and React guide, I started a redesign of my Jekyll page. 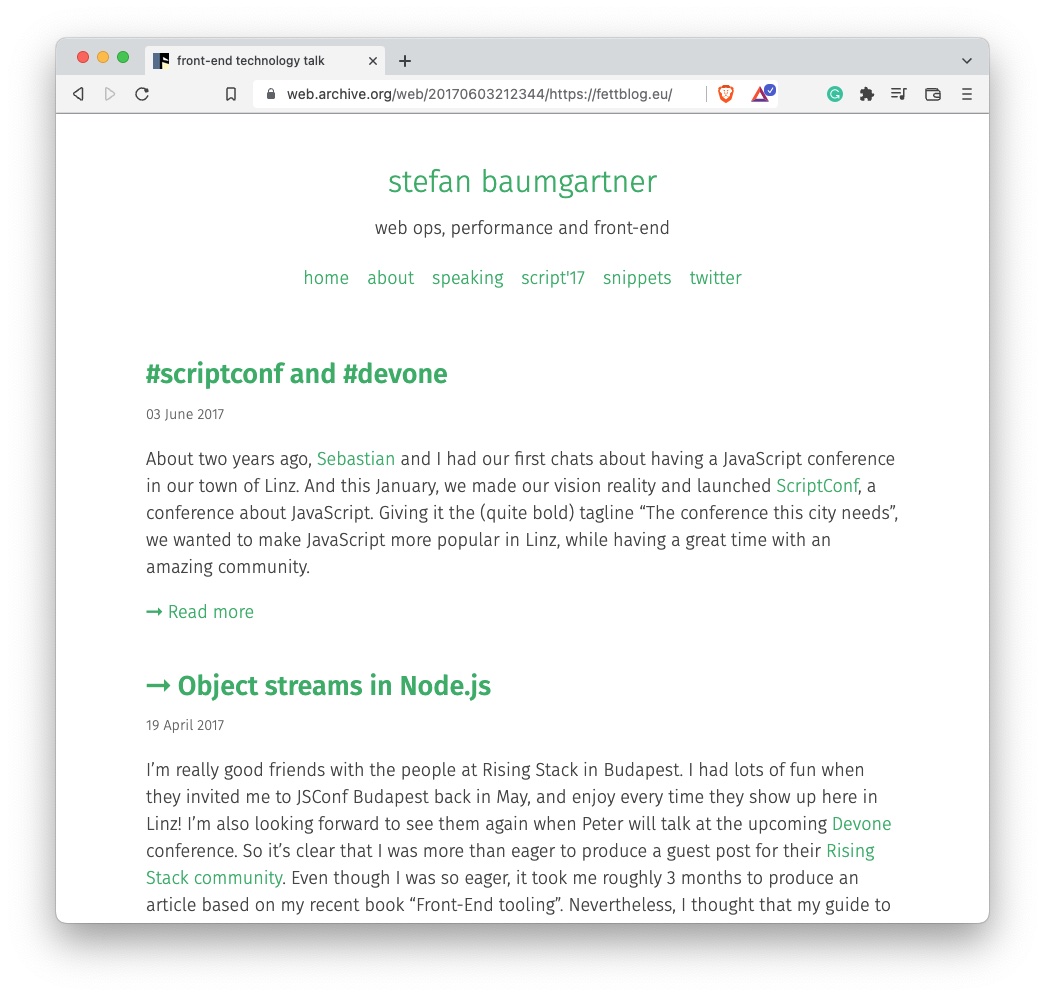 Two years ago, during the pandemic, I did the last major revamp of my site: I switched from Jekyll to Eleventy, which turned out to be a good idea, and did the redesign you can see here. Nothing much has changed since then, except some minor re-designs on the main page. But I got a ton of articles done!

I still like it! I guess I’m going to use it for a while longer.

My blog has always been a reflection of what I’m doing in and outside work. Articles written here have influenced talks. Especially in the beginning, where I’ve been talking a lot about mobile browsers. This has led to arguably one of my favorite talks I ever did, the first one: Mobile Browser Games. It even took me to Orlando, one moment that I’ll never forget. The nice thing: I didn’t give much thought to how the talk should be, I mostly spoke from experience. And I think I never was better. I don’t consider myself a good speaker. I do think I’m a better trainer.

I always published the content of my workshops for future reference. I did a lot of research on Front-End Tooling and published a huge slide deck with more than 100 slides. I was able to give a half-day workshop on Gulp at Devoxx, for which I also created a big slide deck. As of recent, I started publishing all slides and workshop contents in their respective section on this blog.

Publishing this was a really good idea. It leads me to my first book contract with Manning to publish Front-End Tooling with Gulp, Bower, and Yeoman. You can see that during this time I’ve written a lot of articles. A couple of years later I wrote TypeScript in 50 Lessons which was one of the best experiences that I had. Please check out my personal view on how the publishing process was. If I’d had a topic, I definitely would write again for Smashing. And yes, releasing the book also resulted in a lot of articles on that topic.

I found some statistics that might be interesting. I always said to myself that I should “blog more!”. It turns out that I have a pretty consistent output:

I also have the feeling that I write more during Summer and Autumn, but I haven’t run the numbers. In 2021 I found myself not being able to release any article during the end of the year, and I had the feeling that I somehow wasn’t productive. This is when I realized that I do write a lot, I just didn’t publish it in blog form. I mostly did slides for workshops. So I started releasing them here as well and cranked up the number again. That feels much better now.

As expected, I write most about TypeScript. I think that’s also the reason you’re here, aren’t you? Those articles are really popular, especially the TypeScript + React bits. The second category is already Tools, given that I wrote a book about Tooling (and Gulp in particular, see No. 6), it only makes sense that this category is also on top. I didn’t expect that I’d write 15 articles on CSS. Shocking!

But yeah, there is a relation between output and writing a book. And It’s usually that the more I write about a certain topic, the closer the idea for a book is. The output while writing a book is also a lot more compared to the time I don’t have a book idea. I guess I need this as a medium to scribble down ideas and to get things out of my head.

There are more categories, but I truncated the list. You’re not missing out.

What’s nice is that Rust already made it onto this list. 10 articles (or slide-decks) on this blog. Given that I also write about Rust elsewhere makes that number is already pretty high.

Content-wise, the website now consists of 500 files. This includes 173 articles.

Let’s talk about some articles that you folks refer to a lot. I don’t have any detailed statistics because I don’t have proper analytics in place. But this is where I get the most feedback

Stuff that got removed! #

In 10 years, also a lot of things got removed from the blog:

I didn’t think I would have my blog for so long. And I still continue working on it. Let’s see if I will add more to it. I have some things that I need to write down, so who knows. I always think of creating new outlets for different topics, but in the end, it’s just easier to add them to this blog. Maybe this is also the reason why this blog is so active for so long.

Oh, and if you ended up here and are confused what I’m talking about: It’s not feet blog (no!) and I don’t want to have your nutrition & diet content posted here.

Remake, Remodel! Part Three: How to switch from Wordpress to Jekyll

Read more on Remake, Remodel! Part Three: How to switch from Wordpress to Jekyll